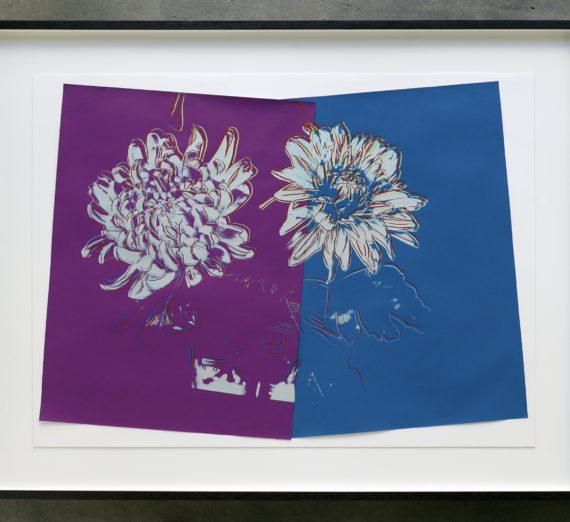 In the early 1980s, Warhol was approached by the Gendai Hanga Center in Tokyo to produce paintings of flowers. Kiku is the Japanese word for chrysanthemum, a flower that traditionally represents the Japanese emperor and Imperial House. This work is from the Kiku Exhibition (Tokyo, 1984) and is signed.

Artists have looked to still life studies comprised of flowers as a subject matter for paintings and drawings for centuries. Throughout Andy Warhol’s career, he created numerous paintings and screenprints that are based on flowers.

More than twenty years after his death, Andy Warhol remains one of the most influential figures in contemporary art and culture. Warhol’s life and work inspires creative thinkers worldwide thanks to his enduring imagery, his artfully cultivated celebrity, and the ongoing research of dedicated scholars. His impact as an artist is far deeper and greater than his one prescient observation that “everyone will be world famous for fifteen minutes.” His omnivorous curiosity resulted in an enormous body of work that spanned every available medium and most importantly contributed to the collapse of boundaries between high and low culture.

A skilled social networker, Warhol parlayed his fame, one connection at a time, to the status of a globally recognized brand. Decades before widespread reliance on portable media devices, he documented his daily activities and interactions on his traveling audio tape recorder and beloved Minox 35EL camera.  Predating the hyper-personal outlets now provided online, Warhol captured life’s every minute detail in all its messy, ordinary glamour and broadcast it through his work, to a wide and receptive audience.